Is Christian College Right for Me? 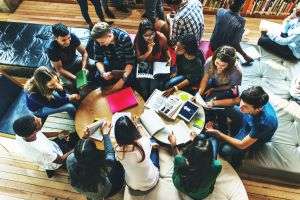 Discouraging statistics about faith in the college years are easy to find. A recent internet search on the subject revealed that only 12% of 18 to 23-year-olds profess to be evangelical Christians, and that 75% of professing Christians will abandon their faith during the college years. We could discuss and debate the “why” behind these statistics, and even question how do I avoid becoming part of these sobering numbers? Some might argue that the faith of these students who drifted away was not true faith to begin with, but rather something well-meaning parents desired for their children. For faith to be complete it must become something we personally “own” for ourselves.

In this article, I would like to assume you desire to cling to Jesus and continue your relationship with Him in the future. If that is the case, then you may be wrestling with the question: where should I go to college? Does it matter to the Lord whether I go to a secular university or Christian college? Where does my faith stand the best chance of not just surviving, but actually thriving? My honest answer to that question is: it depends. There is no “guaranteed path” whereby your faith will not fail. If there were, we would have discovered the course by now and the above questions would be obsolete. Instead, so much of the outcome of your faith depends upon your heart for the Lord, your commitment to following Him and the intentionality with which you pursue Him in relationship. I have seen university students remain on fire for Jesus despite strong opposition to their faith. On the other hand, I have seen students in nurturing Christian campuses struggle with rebellion and walk away from their faith. The question is not so much about where you go to college as who have you determined to be and how determined are you to get there?

Having shared all of this, let me briefly express some of the reasons why you might prayerfully consider choosing a Christian college as you seek the Lord’s will for your future:

You’ll be Presented with a Biblical Worldview. Your worldview is the lens through which you see the world. When you attend a secular university, it should not surprise you that the majority of the teaching you receive—whether in math, science or the humanities—will be teaching devoid of God and Christian morality. Secular worldviews are generally humanistic, leaving no room for the idea of absolute truth which can only be discovered through God’s Word. Though Christian colleges are not all equal and will reflect this to varying degrees you can at least generally assume the professors are born-again believers who are starting with the Bible as their basis for truth. Conversations about faith are encouraged, not dismissed. Scripture is upheld as our immutable source of right and wrong, and is the basis upon which all other education is built. What you believe about the origin and workings of the universe, world history, ethics and the human psyche will be filtered through the gridlock of Truth, not seen as arbitrary, changing and debatable ideologies that are “up for grabs” or defined by majority rule.

It’s a Healthy Place to Question. College is arguably the most formative time of your life. During these four years you are making decisions about priorities and what matters most to you. It is a time when it’s normal to process through the things you have been taught, deciding what you’ll hold onto and what you’ll toss. It’s a season when there is often a “deconstructing” of beliefs as well as a “reconstructing” of stronger ones. It’s important to wrestle honestly with the deep questions of life, and to seek answers for the still unanswered doubts you may have about faith and life in general. What better place to ask these questions than in an environment designed to nurture your soul and equip you for a life of impact for God’s kingdom, whether in full-time Christian service or in a career field where He has specifically designed you to bring glory to Him? Christian colleges can be a safe place to land when you’re seeking answers and still formulating who you’ll become.

You’re Likely to Find Examples of True Faith. Someone once told me the two factors that most influence our lives are the people we know and the books we read. At Christian college, you’re apt to encounter plenty of quality people and books! No matter where we go, we must exercise discernment in who we befriend and what we ingest. As I Corinthians 15:33 says, “Bad company corrupts good character.” Bad company can be found anywhere you look. However, in a Christian college you may not have to look quite so far to find Christians who are the real deal. Yes, there are students who have been forced against their will to attend Christian college, but generally speaking, students are there because they’ve chosen to be, and this is generally reflective of a heart that desires spiritual growth and connection. Once again, it comes back to intentionality in who you pursue spending time with, but whether you are looking for a mentor, a good friend or a potential life partner, Christian college offers a much greater opportunity for finding like-minded people who will strengthen and challenge you in your pursuit of Christ.