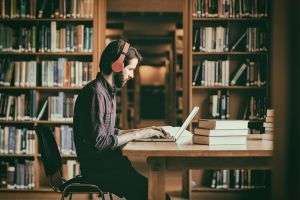 Pay attention as you wander around any college campus and you’ll notice a decently high trend towards electronic “ear wear.” Whether wireless earbuds or noise-canceling over-the-ear headphones, it appears that everyone is tuned in and listening. One study shows the average college student listens to music for four hours per day, and for many students this includes listening to music while studying. Nearly 60% of college students, in fact, say they study better with music. Is this assumption accurate? Does listening to music make you smarter?

The Body’s Response Studies have uncovered mixed results. For a number of years, there was a cultural perception that listening to classical music led to an increased I.Q. This belief was based on one very small study done in the 1990’s which suggested an improvement in students’ ability to complete a task requiring specific spatial reasoning after listening to recordings of Mozart. This overblown assumption was often referred to as the Mozart effect. While no study has ever fully proven a link between music and increased I.Q., studies do demonstrate that listening to music—whether classical, hip-hop, country or pop—activates the right and left hemispheres of the brain simultaneously. Though it hasn’t been fully proven, some scientists have proposed that this may lead to maximized learning. One thing all researchers seem to agree upon is music’s ability to improve mood and reduce stress. These two factors can set off a chain reaction. When listeners enjoy the music they’re hearing, the production of cortisol is reduced and stress-releasing neurotransmitters are released, causing the listener to feel relaxed. The relaxing effect of music is so strong that the measurable benefits rival the relaxation benefits of getting a massage. Similarly, listening to music we perceive as enjoyable has been shown to increase the production of dopamine, serotonin and endorphins which leads to a brighter mood. Low stress and positive mood can lead, in turn, to increased motivation and improved focus, thereby indirectly boosting memory formation and learning. So listening to music, one might argue, inadvertently contributes to better concentration and remembering.

Possible Drawbacks Studies do indicate that the benefits of music may be correlated with the genre of music. For example, music that is “loud and agitated” may have a reverse effect on mood, creating a sense of anger or agitation, and therefore a negative impact on our memory and ability to focus. Some researchers have suggested that perpetually studying with music may create a dependence upon it, making it hard to concentrate during testing or in other settings where music is not permitted. And finally, music with lyrics has also proved to be a distraction in some cases. Some types of learners have difficulty focusing in settings with lots of stimuli, and are able to focus better in silence. However, for those who are good at multi-tasking, the stimulation of music may actually boost brain function and productivity.

Positive Benefits The benefits of music abound! Psychiatrist Cornelius Eckhert coined the phrase “earworm” in 1979 and defined it as “when part of a song gets stuck in your head for an extended period of time.” Though this phenomenon can be annoying, it’s also a helpful tool for learning and explains why, as a child, you were able to memorize the ABC’s or possibly the books of the Bible, simply by attaching content to a catchy tune. Why not capitalize on some positive “earworm” during your next midterms? Table of Elements meets Top 40, perhaps? Other studies have shown that classical music can be helpful in reversing insomnia in college students. In some cases, it has improved sleep more effectively than medication. Researchers believe the reason behind this may once again be linked to the increased positive mood generated by hearing good music. And what college student doesn’t desire better sleep? One other survey by CSU Global saw a correlation between students who studied while listening to music and higher GPA. They found that those who listened while studying were more likely to be amongst those with a GPA of 3.2 or higher. So while debate still exists, it seems the sweeping body of evidence suggests that listening to music ought to produce at least some advantage. So whether your jam is instrumental rock or world music or jazz or movie soundtracks, go ahead and start building your next playlist!